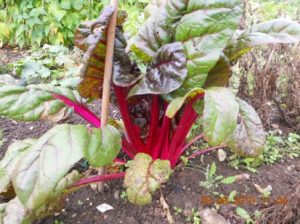 ‘As the day lengthens,So the cold strengthens’Following a relatively mild January, Ian Curry’s forecast is in line with folklore and he predicts a cold February for Chipstead Valley. However the days are lengthening and spring is not far away so we can at least start sewing seed in the greenhouse (or indoors).So get an early start with Brussels sprouts, cabbages and cauliflowers (early summer varieties), cucumbers, melons, tomatoes and peppers.

Towards the end of the month you should be able to plant Jerusalem artichokes, garlic cloves, shallots and maybe even onions if the ground has been warmed up. You should also be able to sew seeda of early variety peas, broad beans, parsnips and carrots. Any of last year’s parsnips still in the ground should be lifted as soon as the weather warms up or they will produce new leaves and deteriorate.

As for fruit, this is the last month of winter so it’s your last chance to finish off the winter planting and pruning (see December and January).

Finally the allotment year really gets going next month so this is your last chance to relax!