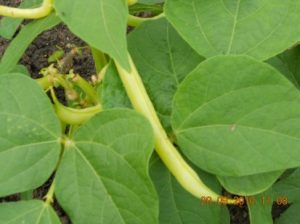 All risk of frost has now passed, the soil is warm and the plot is fast filling up. Time to transplant tender vegetables and continue successive sowing, but best of all harvesting is starting in earnest with asparagus, broad beans, peas, spinach, spring cabbage, rhubarb, gooseberries and strawberries rewarding all our efforts.Although you will still be transplanting hardy autumn and winter vegetables, mainly brassicas, these have long maturing periods and do not have the urgency of the cucurbits (marrows, squashes, cucumbers and pumpkins), sweetcorn, runner beans, aubergines, tomatoes and peppers which will be killed by the first October frost so get these in asap and if space is at a premium give these priority. Towards the end of the month the first potatoes will be harvested releasing space.Successive sowings ie every two weeks should be made of salad crops and dwarf beans this month. It is really too late now to transplant lettuce thinnings, it is better just to thin and compost the surplus. For radishes and turnips flea beetle is still a problem but later in the month they disappear and it is not too late to sow them.Onions should be given attention all month. It is important to keep them weed free and watered, and keep an eye out for bolting – remove the thick central stalk immediately if it is attempting to produce a flowerhead.

Finally, a tip for thinning carrots. This is best done in the morning or early evening as the carrot fly is less active at these times, and remember to press the soil firmly around the remaining roots.