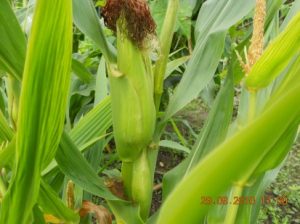 This is another busy month in the allotment but it is also the month many of us take our holidays. This means missing produce rather than missing out on sowing and planting and we’ve all experienced coming back to giant courgettes and bolted rocket. Still when we are around it’s vital to keep on top of the maintenance.Any leeks not yet transplanted must be done early this month. Endives, celery and leeks should be earthed up. Shallow rooted, heavy vegetables such as Brussels sprouts, cauliflower and kale also benefit from this treatment, and sweetcorn may need a bit of support.Tomatoes need pinching out almost daily now and new growth tied in. Even bush tomatoes are better given the support of a stake. As the fruit starts to set tomatoes need a weekly liquid feed. Celery, leeks, and the curbits all are greedy feeders too.Winter spinach, quick-growing salad crops, Japanese onions and kale can be sown this month but the emphasis should be on harvesting. Early maincrop potatoes should be ready this month and onions, which are ready a couple of weeks after the shallots. Beans, courgettes, marrows and cucumbers need to be checked every couple of days and picked to encourage further growth. Sweetcorn has to be regularly checked too – if left after it ripens it is inedible.Strawberries and early raspberries will be finishing now and should be cut back, weeded and mulched. Apples, plums and pears are ripening now for an early harvest – watch out for windfall and wasps. Pruning can also start, for cherries, currants and gooseberries.

Remember that as you harvest it is important to clean the ground left behind to hinder pests and diseases.